We have a bird outside our bedroom window… I’m not sure what kind it is, but it insists on waking everyone around 5 in the morning.  On week days it isn’t so bad as distilling begins early for us on these crisp winter mornings and once you’re up, you do see the best parts of the sunrise.  To convey the beauty of distilling on the river by the sea in words or images never really does it justice.  When the river stillness reflects mirror images of the surroundings to the rise and fall of the still in reflux,  whisky distillation is a uniquely peaceful way to begin a day. 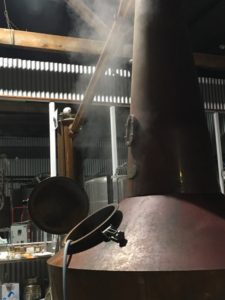 Letting off steam after a low wines distillation.

Whisky across the world is a product of double or triple distillation.  Distillation concentrates the alcohol content but also removes impurities creating a heart of the spirit -sweet and fiery.  The process of distillation involves gradually heating the contents in the still to separate the alcohol content from the water.  As alcohol is less dense than water it converts to vapour at a lower temperature which after refluxing, passes up the neck of the still, over through the lyne arm to a column shaped vessel called a condenser.  The cold water circulating through the column allows the alcohol vapours to cool and become liquid once again.  As the cooling vapour becomes liquid it is collected at the bottom of the condenser and transferred through an outlet tube sometimes called a “parrot” into a holding vessel where it can be weighed, and alcohol strength can be measured.

At these temperatures alcohol isn’t the only thing that manages to make it over the line arm.  Lighter compounds originating from the wash can also combine with the alcohol vapour and eventually adding complexity to the flavour and aroma profiles. How much of these make it through into the spirit is very much dependent on heating methods and the still’s overall shape and where your cuts are made in the spirit run.

Here at the Fleurieu Distillery, we double distil.  Essentially this means after the brewing and fermentation process, the wash goes through the still twice to create a crystal-clear spirit, sweet and slightly fiery ready for years of barrel aging. 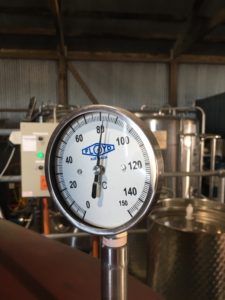 The first time through the still, the whisky wash is converted into low wines.  The alcohol content goes from around 6.5 or 7% to around 29%. The set up for a low wines distillation is not as complex as a spirit distillation as there are no cuts as such, instead as much of the distilled low wines from the still is collected in one vessel until the alcohol coming off the still drops to around 8%.  All low wines are collected measured in weight, alcohol strength then transferred to a holding tank until enough low wines have been collected for a spirit run. 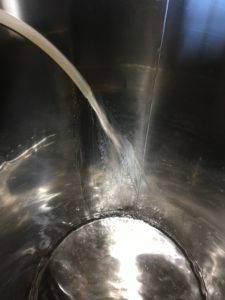 The heart of spirit distillation.

Spirit Distillations are more complex because of the importance of collecting different elements of the spirit coming off the still.  Parts of the spirit distilled contain higher fusel alcohols that are highly toxic when consumed so it is vital that these are removed carefully.  Cuts made are made to collect different parts of the spirit. Once fores heads, hearts and tails are collected in separate containers, they are weighed and measured for alcohol content.  While fores will be collected and eventually destroyed, the heads and tails will be stored and used in other spirit runs several times over until what is collected needs to be discarded.  At the end of the second distillation the heart of the spirit is at an amazing 73%!

The hearts are watered down to cask strength (63%) and then measured carefully into reconditioned port or sherry barrels for aging through countless crisp winter mornings and warm summer days.  The magic and mystery of the barrel’s influence over many years transforms the new make spirit into a glorious amber liquid with extraordinary flavour depths and mouth feel.  It can seem like a long time but we all know quality whisky is worth the wait.