Q: What’s the go with the logo?

The Story Behind the Fountain of Youth

The logo image is based on the historic 400 year old fountain statue ‘Manneken Pis’ or ‘Le Petit Julien’.  For those who have an art or history background or have travelled – their instant recognition of the connection to the tiny Belgian statue is engaging.

For us this logo encapsulates our family when we first began distilling in 2013.  Our sons were two and five, the logo captures not only their ages and heights  but also the close relationship brothers share.  For a true brother is someone who will always have your back – even when you don’t see eye to eye! 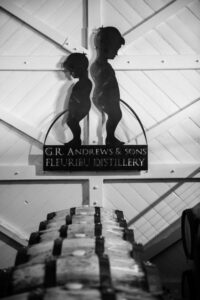 The Fountain of Youth, a timeless silhouette of our family when we first began distilling.

As parents of two beautiful boys, we are enormously grateful for the abundance of joy, exuberance and spontaneity that fills our home because of them.  The silhouette logo of the boys standing back-to-back captures this and more.

Fondly referred to as the ‘Fountain of Youth’, the image became an easily recognisable logo within the emerging whisky scene here in Australia and yet the roots of the design hark back to something so much older.  The simplistic yet memorable the silhouette of the two boys on the Fleurieu logo is based on the historic fountain statue ‘Manneken Pis’ or ‘Le Petit Julien’, a tiny Belgian statue of a boy urinating.  There are many legends that surround this bronze statue and it has become a celebrated focal point for the people of Brussels.

Many years ago, in Wales, Gareth’s father Melbourne Andrews worked in a foundry where they cast a range of things including statues. One of the things commissioned was the reproduction of the small Belgian statue Manneken Pis.  As with any production process, not every statue cast was formed perfectly. One of these made its way home where it became a permanent fixture in Mel’s shed.  As Gareth grew up the tiny copy of Manneken Pis was always there. He didn’t give it much thought as a young child but as a young adult fascinated with history through high school and university, he learned of the original statue and its past.  He’d often spot versions of this very same statue in a variety of garden settings.

Fast forward to late 2012 when we were organising our new venture into whisky making, we were trying to distil what family was for us in a logo and this was the light bulb moment for Gareth.

For us this logo encapsulates our family.  The image is very much a snapshot in time of when we first began distilling in 2013 when our beautiful boys were two and five.  The logo captures not only their ages and heights but also the close relationship brothers share – for a true brother is someone who will always have your back – even when you don’t see eye to eye.  It embodies innocence, carefree cheekiness and exuberance.  The logo image connects with people of all ages but for those who have an art or history background or travelled – their instant recognition of the link to that tiny historic fountain statue delights us.

Q: Why do the barrels have names?

I can hear you asking ‘Why on earth would you name barrels?’  The reason is threefold:

Names and numbers are powerful identifiers.   Numbers create order but are impersonal… bestowed names however, invoke meaning and emotion while simultaneously shaping expectation in the creation of persona.

Here at Fleurieu we not only number our barrels but name them too. 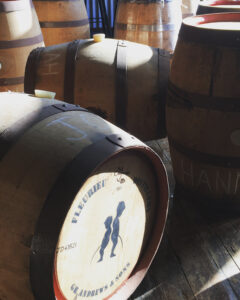 These 100L barrels are named after famous couples.

By law every barrel filled at Fleurieu  must be designated a number specifically for excise purposes.  This is something we adhere to. The number given to each barrel carries with it the Julian Date on which it is filled and the number order of how many barrels were filled on this date.   In addition to the clerical number given, each barrel is individually named. The name tells us so much detail.

Names on barrels not only enables us to recognise what size it is and where it is stored, it can reveal the type of barrel.  For example…

100L Barrels are generally filled as pairs and then named after famous couples.  The reason for this is  a single spirit run off the still will yield around 220- 235L of spirit.  This allows us to be able to comfortably fill two 100L barrels.  From our very first 100L barrels the naming continued through into other series of barrels.

Our most recent series of barrels named were the Barrels of Gratitude.  Recognising all those special people both in and outside of the whisky industry who have been pivotal in our personal whisky journey.  You can read more about these through our Words to Whisky posts on Instagram or by following this blog link https://wordstowhisky.com.au/2020/04/barrels-of-gratitude-1/