Little did we know when we moved to Goolwa 22 years ago how well situated it would be for whisky production and barrel aging.  The great southern ocean moderates temperature and compared to Adelaide we always have fewer days of extremely hot weather.

Overall this last summer for us was a cooler, wetter one.  The climate was brilliant for being able to maintain production both in brewing and distilling.  During the few weeks of sweltering heat over Adelaide through to the Willunga Hills, Goolwa had hot days but the added bonus of relief from cooler sea breezes during the evenings along the coast. 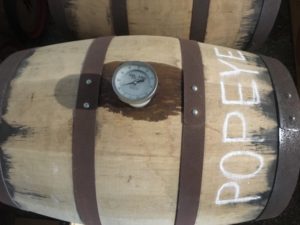 Temperature monitoring of barrels in dunnage.

Our coastal climate and microclimate within the distillery also make an impact on the interaction of spirit to wood.  When we began distilling 4 years ago we also began to monitor the temperature of our barrels.  What was the reason for this?  Well… the distillery and barrels were going to be housed in a heritage listed railway goods shed on the banks of the River Murray with no insulation. This aspect concerned us. 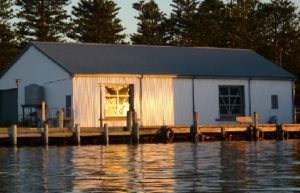 The Good’s shed: home to the Fleurieu Distillery

In a bygone era this beautiful old building was the point at which goods were exchanged from paddle steamers to steam trains.  The shed was renovated by our local council before we leased it under our Brewery label ‘Steam Exchange’.  As a result of being heritage listed, strict limitations on what could be done within the space or to the fabric of the building had to be observed in order to preserve the rustic charm of yesteryear and the tenacity of a building so honestly built.

The Railway Goods Shed today, is still very much ‘what you see is what you get!’  Beautiful old beams in a high roofed shed with short sheeted painted corrugated iron for cladding.  But with no insulation whatsoever and living in South Australia, Gareth and I were well aware that too much heat for extended periods of time could lead to a titanic – tannic failure for whisky.

Instead we have found the opposite!  The barrels stored here in a cooler maritime part of our state really reap the benefits of the changes in coastal climate.  The intermittent hot summer days and cool sea breeze nights allow the barrels to not only breathe in the new make spirit but being close to the ocean and river they are also exposed to the changes in humidity and air pressure.

Whisky barrels worldwide spend several years aging the precious spirit inside and impart more than just the contents of what was previously held within it.  Barrels housed here absorb environs of river and sea as the spirit ever so slowly moves in and out of the wood over time. This process helps to develop specificity of place and eventually distinguishes one distillery from another.  This aspect of whisky terroir is as important as fill strength, still shape, yeast selection, ferment regime, barley type and malting specifications (just to name a few).  All these details combined give a wonderful diversity of whisky to be enjoyed from one distillery to another.

In the long term, our aim is to incorporate additional barrel storage offsite.  The beautiful space we are in has limitations as it is a tourist based venue as well.  Storing barrels further inland within our state, the spirit would be exposed to too much heat for extended periods of time.  In the summer of 2016, Adelaide and most of the northern side of the Mount Lofty Ranges experienced 27 days in a row of over 36 degrees with very little relief at night. In order to produce great malt whisky in these hotter areas we would have to forgo the element of cultural terroir as it would be imperative to insulate and protect the barrel from harsh environs and reduce the risk of enormous amounts of tannins transferring rapidly into the spirit – potentially making it undrinkable.

In our aim to preserve the cultural terroir of climate and its effect on the spirit through the barrel to give people the taste of the Fleurieu, we have begun to examine temperatures across South Australia.  Following a 15km inland line parallel to the coast between Robe and Talisker (near Cape Jarvis) we’ve noticed temperatures have the same fluidity.  The peaks are high but not for long and the changes in temperature are reflective of what we experience here in Goolwa due to the maritime conditions off the expansive waters of the Southern Ocean.

Ultimately we will locate extra barrel storage area within the Encounter Bay region, but if you asked Gareth his thoughts on the matter he would say, “There is potential for an aspiring single malt whisky distiller to set up in beautiful little township of Robe. It may be long way from anywhere, but would be a great place to make whisky in the future.  Ahhh if only I was 20 years younger…”