The Art of Blending

The Rubicon is our second release and is best described as a lightly peated, port-barrel single malt.  ‘Why the Rubicon?’ I hear you ask.  Well let me tell you a little story….

In 2004 we began our business as a microbrewery.  We began to explore whisky production in 2009 and have gradually moved into distilling rather than brewing craft beer.  90% of our production on site is now whisky.  Here then is our Rubicon, our point of no return in the transformation from brewery to distillery.  Now we continue the journey.  There is no turning back. 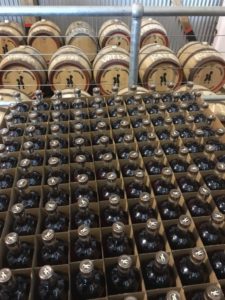 The peated, bottled and awaiting labels.

Last week we bottled after blending selected peat whisky barrels.  Blending took longer than I ever envisaged!  I am fascinated with the aromas and flavours that emerge through science and method in brewing and distillation, and how the complexities of whisky spirit increase after maturation in the barrel.  I now truly understand why blending is an art, for there is no guaranteed recipe for success.

Navigating a way through the complex aromas and flavour profiles of each barrel, selecting those ready for bottling and setting others aside for longer maturation is a lengthy procedure.  Blending takes time… sniffing… tasting and retasting paying attention to subtle aromas through the mouth rather than just the nose.

This analysis was done over several weeks as the effect of whisky alcohol at cask strength on the olfactory senses can dull and mask the flavours and aromas so that everything begins to taste the same.  Using accurate additions of water we reduced the alcohol to 55%, 50% and 40% to monitor effects of changing surface tension to the aroma profiles.

After Gareth put me on to a great article by George Manska called “Water and Whisky…Why?” I began to really understand why aroma and flavour compounds in a whisky seem to change with the addition of water.  Very simply: The impression that adding water to whisky opens it up and releases aromatic compounds is not accurate.  Yes – water additions change aroma profiles but this is because it affects surface tension.

Surface tension is a force that acts as a barrier between air and liquids.  In spirits it prevents lighter flavour compounds from simply evaporating and holds it within the liquid below.   Alcohol evaporates faster than water and has less surface tension.  When water is added to whisky it increases surface tension keeping higher alcohol (which can be nose numbing) trapped in the liquid but it will also reduce the complexity of aroma profile unless surface tension of the whisky is broken by stirring or swirling.

There were a couple critical aspects we experienced in blending our peat barrels that tied in with the article.  One of ultimate importance was Finish.  Finish refers to the overall flavour which is taste, mouth feel and smell together. 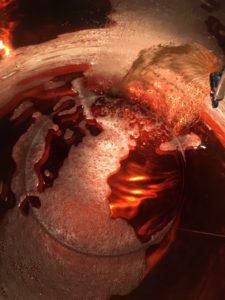 The mahogany glow of the Rubicon.

This involved tasting and reviewing the cask strength in different shaped glasses to gain a wider understanding of the aromas and flavour profiles present.  Each barrels offered slightly different expressions of the spirit aged in it so to just dump and stir all 4 together would mean one or other of the strengths apparent in one barrel would be taken over by the depth of character in another.  Through a process of experimentation and careful recording of where water could be added without compromising mouthfeel, flavour and aroma we tested each barrel at different alcohol strengths, varied combinations and gradually came to the ‘Rubicon’ blend at 55%.

The Rubicon’s gorgeous mahogany colour carries the nose of dried fruits, vanilla and toffee apple.  Peat aromas are delicate and reminiscent of toasted nuts and in taste it plays second fiddle to the port barrel characteristics.  As it gradually reveals its smokiness there is a lingering finish of maple and baked vanilla.  Lip smackingly luscious!